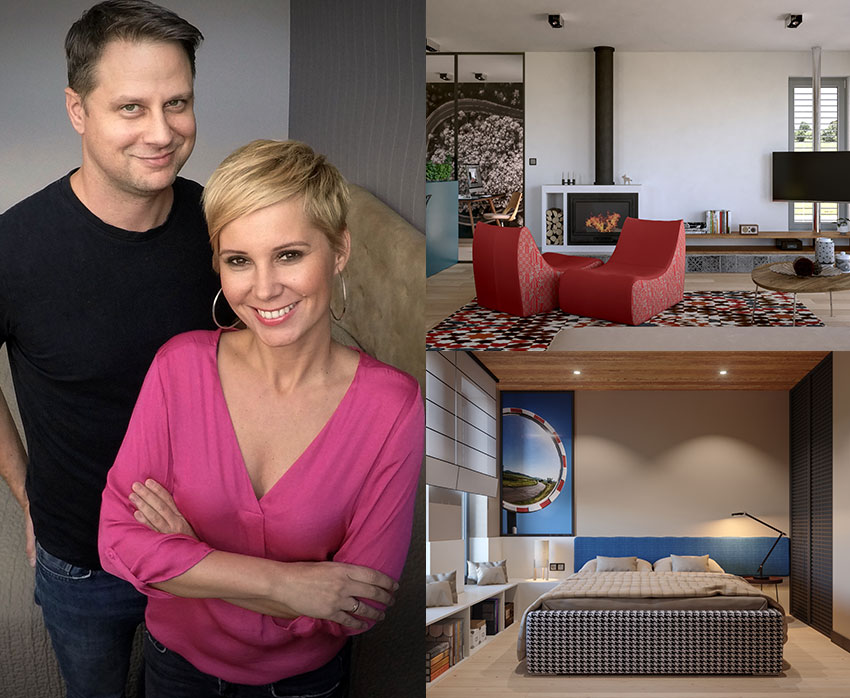 When Designers Plan Their Own Home Part 2

"We entered the Style & Draw interior design competition as a team with my husband, Gergo. I have been an interior designer for 8 years, he has been doing visual design for a year. The idea to design something for ourselves was very intriguing. As we are about to start our own family, it was much fun to play with the idea of imagining our future home.
I have prepared the documentation - demolition, construction, suspended ceiling, electrical plans, wall elevations and mood boards with ARCHLine.XP, a platform I got to know around the beginning of this year, and which I have been using for my work ever since. Before I used to draw by hand, which was very time consuming, but ever since I started using this software, my work has become much faster and far more accurate. I used the software Cinema 4D for the visuals.
The 95 m2 house - the subject of the competition - was transformed in a great deal, and became a home with spaces that fulfill the functions and needs, with modern technological background and a contemporary selection of textures. When creating the plans, the most important aspect was to keep an eye on the prospective new roles and functions, which demanded: a more spacious livingroom-eatery-kitchen combo, home office, children's bedroom, master bedroom with garderobe and a separate shower, a bathroom with bathtub, separate toilet.

We were going for a home with the right proportions, and clean appearance, while at the same time possessing characteristic color patterns and geometric shapes. We wanted the logical organization of spaces to have an individual, unique appearance. We love spectacular and creative solutions, but what's really close to our heart is a clean and simple design.

In the original plans there's the livingroom-eatery-kitchen and 3 bedrooms, but what we needed was a more spacious common area, home office(s) and 2 separate bedrooms.

The area of the 3rd room from the garden was added to the livingroom-eatery-kitchen, to which the home office area can connect organically. In order to have some form of separation, we created a glass wall (made of 3 panels of sliding, clear safety glass panes) and as a result, the kitchen still has a spacious atmosphere, with a lot of natural light coming in.

The wall of the home office is decorated by wallpaper, which is made of a photo, made by one of our friends. It evokes the Matra hill, to remind us of our roots in the Hungarian countryside.

The common space has a clear-cut design, the kitchen island stands out with a brave choice of color, the fireplace is welcoming, the chairs in front of it are playful - all this culminates in a special atmosphere. The dinner table can seat 6 people, and there's a large L shaped sofa - seating a larger group of friends should not be a problem.

The sill height of the opening behind the tv was raised to 40cm, so that it would coincide with the fireplace and the bookshelf.

The custom, mirror-equipped built-in wardrobe, and an additional cabinet (which is a continuation of the kitchen cabinetry) take care of all our coat and shoe storage needs.

The room intended for the newly arriving family member is equipped with a short cabinet and a mattress dedicated as a "playground". As a mood setter, we have a nice, playful wallpaper with polar bears.

In the master bedroom we have created a space, which evokes the mental image of a hotel room, where, besides our own personal space, we also have enough space for storage and a facility for the morning and evening bathroom routine. The 3 different functions are connected optically by a suspended ceiling, made of wainscot, and sliding doors, which run from the floor all the way to the ceiling.

The division between the shower and the home office is made of an opaque glass wall, so that even the shower gets natural light.

On the furniture fronts of the garderobe, we see customized mirror panels, which rhyme with the solution we saw in the anteroom.

The sill height of the master bedroom windows were decreased to 40cm, so that we have a greater space perception, even when lying on the bed.

We have put the washing machine in the bathroom, which opens from the hall. Also, we installed a bathtub and a toilet here. There's also a separate toilet, with a washbasin.

We have put parquet on the whole surface of the house (except for the bathroom and the toilet). This ensured that the natural wooden textures are represented sufficiently.

There are blilnds on the windows to provide the necessary shading.

As we had a heat pump HVAC system in mind, there's no need to install radiators or AC units on the walls."