The Brandenburg Gate (Brandenburger Tor) is a major landmark of Berlin, and has been a witness to major historical events. With its tall pillars and classic shapes, it's an interesting edifice to rebuild in ARCHLine.XP. Let's see how we did it!

The Gate was built on the orders of Prussian king Frederick William II in the 18th century. Designed by architect Carl Gotthard Langhans, he was tasked to create something impressive, 65 meters in width, and with pillars 15 meters high. The Gate has since became a symbol of European unity and peace. We remodeled this unique structure in ARCHLine.XP - as always, we are on the lookout to see what we can learn during this process, what are the tricks that we can adapt to our everyday work. 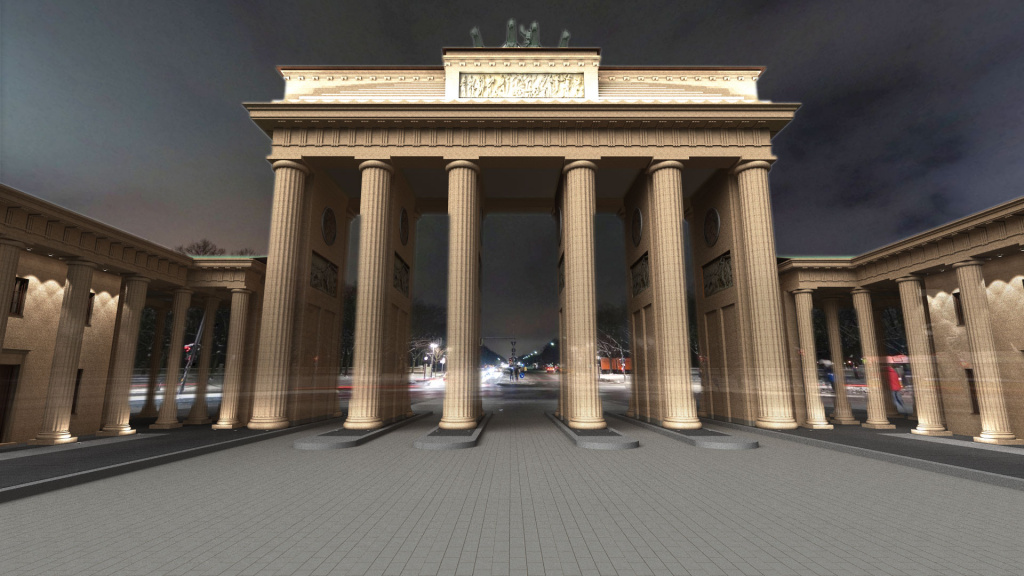 Rendered by: CADLine Ltd. via the ARCHLine.XP integrated render

On the use of existing drawings

Work started by collecting field images (during a site visit in during summer 2018) and researching floor plans and elevation drawings, available online. There were several floor plans at our disposal, but they were all representing one of the many different shapes the gate has taken during its turbulent history - we have decided to model its existing form.

A floor plan from 1820. Work like this always starts with research. This one could be a good basis for our work, but we'll model the recent status instead. Source: Wikipedia

Once the relevant floor plans were imported into ARCHLine.XP as raster images, they were scaled and cropped. We always urge ARCHLine.XP users to redraw the imported raster images - this helps to better position the 3D shapes later. ARCHLine.XP offers standard CAD tools for such tasks. Fortunately, the building is symmetrical, so we just copied and mirrored the vector drawings over a predefined axis.

Another aspect that made the re-drawing of the floor plan relatively easy was that many elements repeat with a fixed frequency. This is where the Array tool comes in - when we were redrawing the bases of the columns, we just typed in how many copies we want over what distance, and the program took care of the rest.

We also made sure to keep the imported drawings - and there were many - on separate layers or floors, this way we could snap to them, but at the same time, we were prevented from accidentally moveing or deleting them.

Once the drawings were at hand, we started building up the model in 3D

The columns are the most defining features of the gate. Getting them right is the essence of the model. First, we had to create a cross-section: drawing a cogwheel-like shape is fairly easy, using the ARCHLine.XP CAD tools under the Drafting menu. Once the profile was done, we saved it to our library, and used it to create a customized column, which we saved as an ARCHLine.XP Style for further use.
The column bases and heads were modeled by using ARCHLine's own 3D modeling tools, mainly the Revolve 360 and Extrude features. 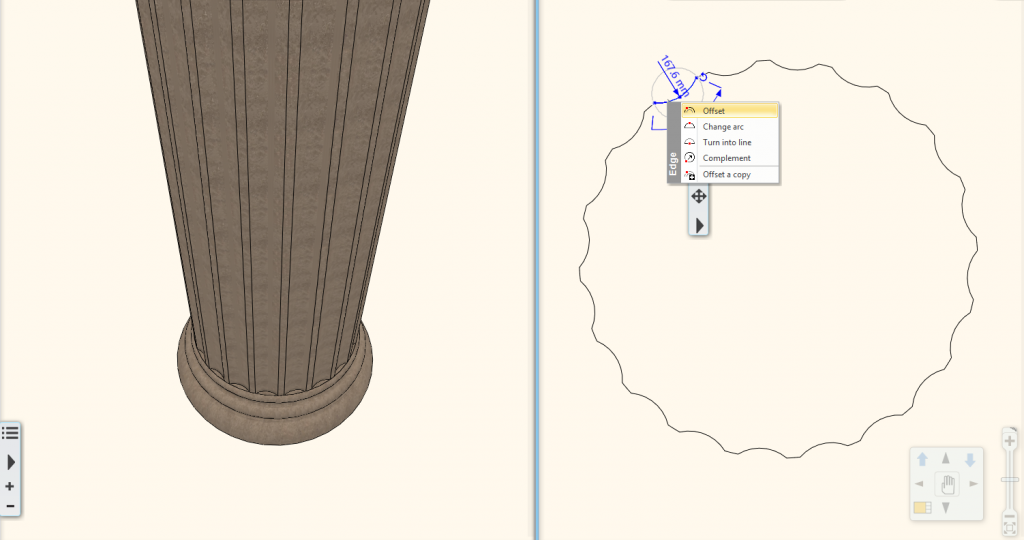 Modeling the column presents the standard ARCHLine.XP workflow - we create 2D profiles, which we extrude into 3D solids

There are several decoration elements on the Gate, which repeat at a defined frequency. Of course, we can use the aforementioned Array tool, but if these elements are not aligned one straight line, and they actually flow around the structure, there's another way to get them done. Meet the ARCHLine.XP "Railing" tool. Contrary to its name, this feature does much more than creating railings: it allows us to define a path, along which objects, profiles, sweeps, or any other elements with varying properties can be arrayed, with a preset distance between them. This came very handy when modeling the friezes - we first created one frieze unit, then drew the path along the facade, added the frieze, and lastly defined the repetition frequency. The result is a zigzagging string of decoration elements. It's great that they handle as one unit - we do not want to get lost in the large amount of objects that we are creating. 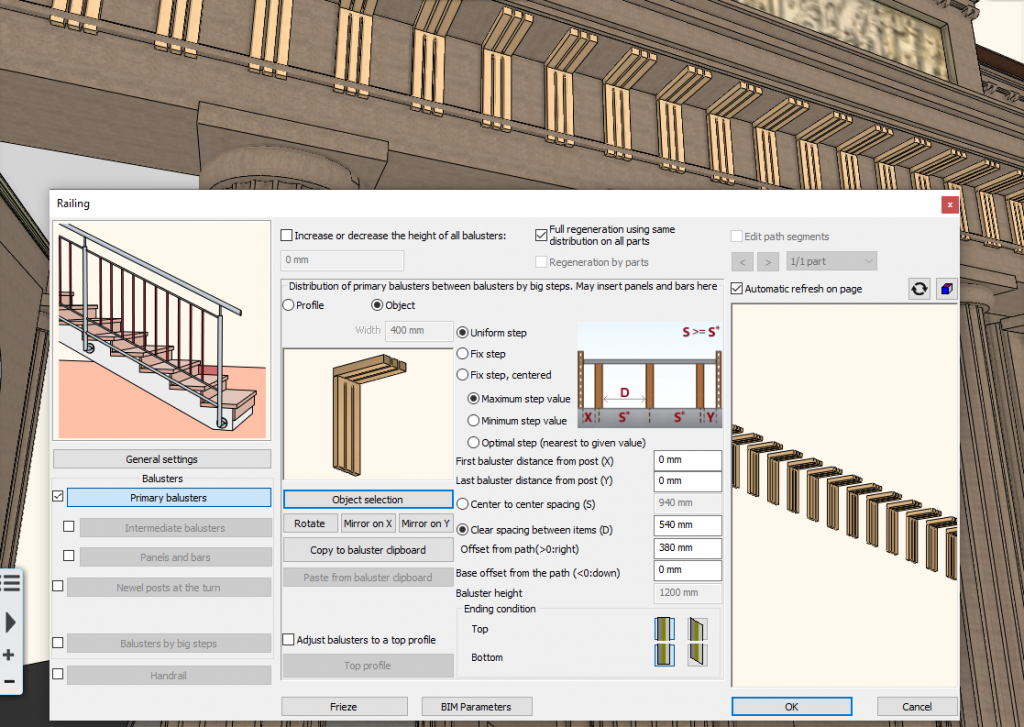 When we are modeling, time is our most vital resource - we have to think carefully what we spend it on. As ARCHLine.XP is able to tap onto sources of existing 3D models, it is always worth to check if there are objects out there that have already been modelled. The famous Quadriga, the four-horse chariot of the Goddes of Victory has already been modeled and made public on the Trimble 3D Warehouse®, so that's what we used on this project. While working with objects from external sources, we have to make sure the objects are in the same scale as our model, and they are of sufficient quality. Most importantly, we have to credit the original author. 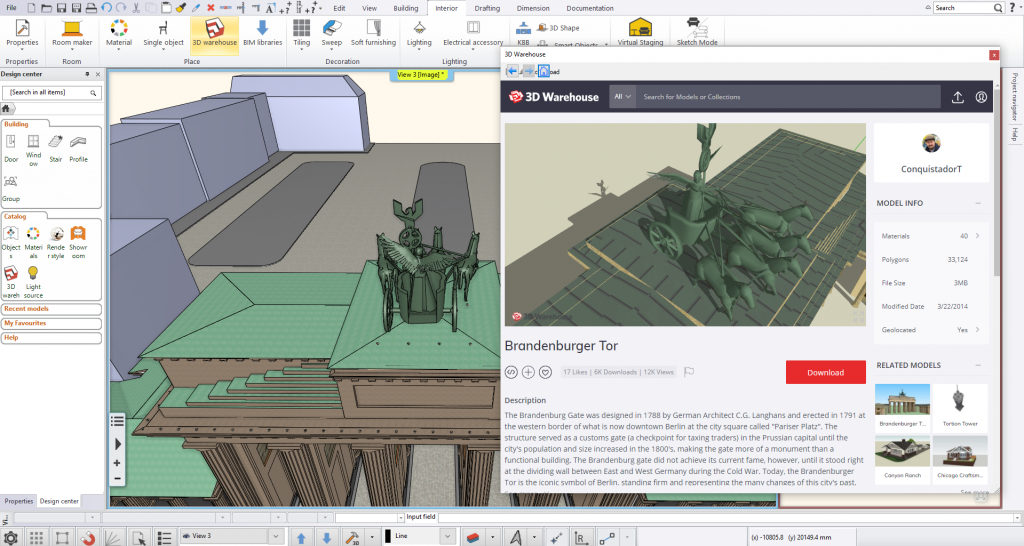 Using ARCHLine.XP's connection to the Trimble 3D Warehouse®, we might find models that have already been created.

In order to give perspective to the Gate, we also did a very simple model of Pariser Platz, the square behind the building. We used the Building volume tool to stand in for the multi-storey neighboring buildings. This helps us to quickly build up a city block, which not only give context to our model, but would also give some shadows, which is vital for our rendering efforts. 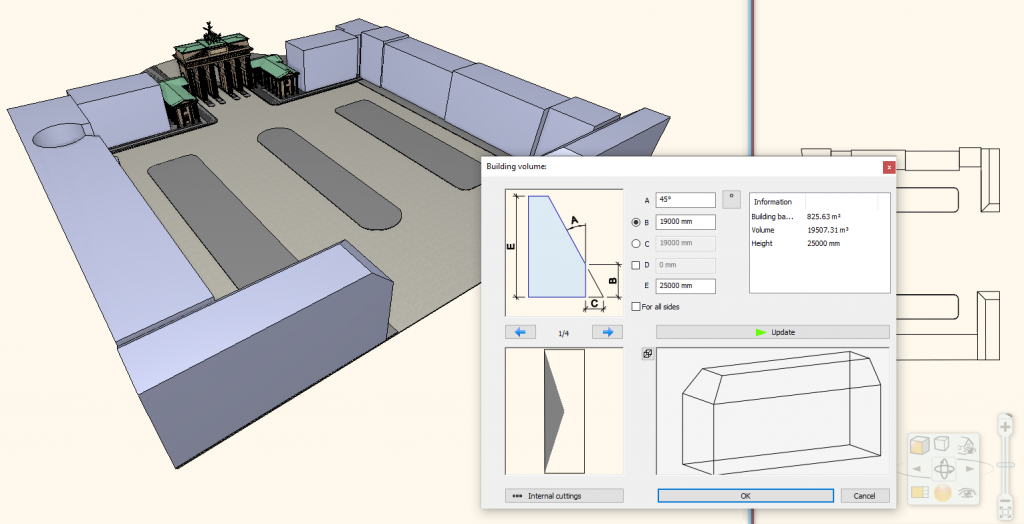 Then came the lighting - ARCHLine.XP has a large variety of IES light sources, so we used the Array tool to place our lamps to light up the scene. We placed many on the floor, on the roof under the Quadriga, and even at the foot of the columns. The built-in real time render helped us to see if the lights were set up sufficiently. When the result was just about right, we have unleashed the final render, results of which you can see above, under the Visuals tab.

The result is a faithful representation of the original structure - as always, it's a great fun to model buildings like these. We always learn new ARCHLine.XP tricks as we go.

Try your hands at ARCHLine.XP - get a free trial

Join our community to get the latest tutorials, offers and news delivered directly in your inbox.